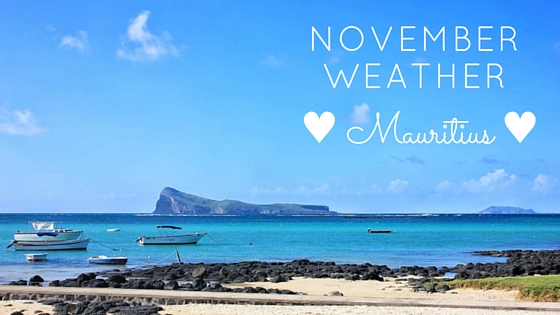 Traveling to Mauritius in November? Wondering what the weather will be like? Then keep reading! For more information about where to stay, check out our blog post Where to Stay in Mauritius.

November is a dry month. Both precipitation and humidity are relatively low. If you like warm weather, but not excessive humidity, November is a great month to visit.

For most of the island, November the driest month of the year. It’s very possible you won’t see any rain during your one or two week vacation, and if you do it will likely be short lived and not particularly heavy. While it is possible to see heavy rain during November, it is quite rare.

The wind-producing anticyclones of the winter have abated, and cyclones are very rare in November. This makes November a calm month.

Technically the cyclone season in Mauritius is from November to April, but cyclones in November are very rare.

November is the sunniest month in Mauritius. You can expect abundant sunshine anywhere on the island.

Sea temperatures rise to around 25 degrees in November, which is slightly warmer than the 23-24 degrees experienced in the Mauritian winter. Sea temperatures generally lag air temperatures by a month or two, so the sea will be a refreshing break from the soaring daytime temperatures.