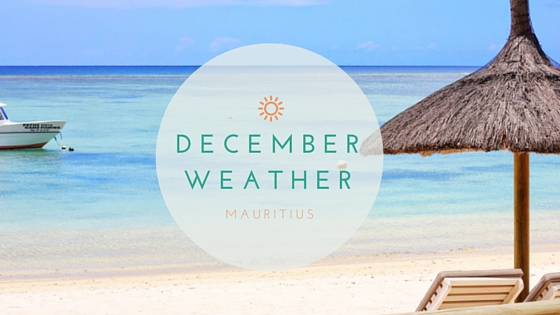 Traveling to Mauritius in December? Wondering what the weather will be like? Then keep reading! For more information about where to stay, check out our blog post Where to Stay in Mauritius.

By December, summer is in full swing in Mauritius. At the beginning of the month temperatures are already hot and they become slightly hotter and much more humid as the month progresses. The end of December is the official start of the wet season in Mauritius, but often times the first real summer rains hold off until January.

Daytime temperatures are hot throughout the month of December and nighttime lows become progressively warmer as the month progresses. Along the coasts, temperatures between 30 and 35 degrees during the day are common, while nighttime lows rise from 20-21 degrees at the beginning of the month to 23-24 degrees by the end.

Humidity increases as the month progresses. At the beginning, it’s often relatively dry, but by the end humid conditions can be expected. The rain may hold off, but high temperatures and high humidity give the end of December a very tropical feel.

The beginning to middle of December are usually quite dry. However, depending on the year, rainfall may increase towards the end of the month. Overall, December is wetter than November, but drier than the January to April summer season.

Higher winds associated with thunderstorms or downpours are possible, however, December is generally not a windy month.

Cyclones are possible in December, but are not as common as they are in January to March.

December is a sunny month overall. While sunshine hours are slightly less than November, it is still one of the sunniest months.

Sea temperatures rise to around 27 degrees by the end of December, on the way to their 28-29 degree peak in February and March.