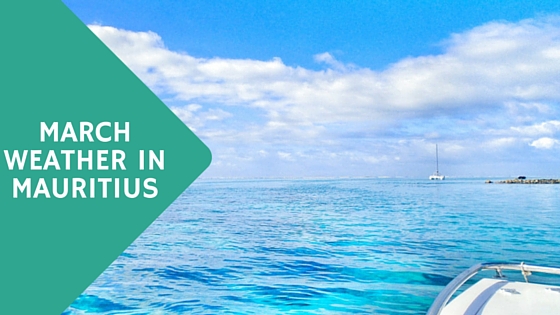 During March, summer is in full swing in Mauritius. Days are hot and humid, nights are sultry, and heavy afternoon showers are commonplace.

Temperatures in March are similar to February. Daytime highs are typically between 30 and 35 degrees along the coasts and lows range between 22 and 25 degrees. Very hot days may see temperatures in the north, west and especially around Port Louis nudge above 35 degrees.

March is a humid month, so humidity will accompany the high temperatures experienced.

March is statistically not as wet as February. In fact, over most of the island, March and April have similar amount of precipitation, which is less than both January and February. Nevertheless, afternoon downpours lasting a few minutes to a couple of hours are common. Heavy rainfall typically falls in the late afternoon or early evening. More rarely, a larger system may bring constant rain for a day or two. However, abundant sunshine can be expected as well, especially in the north and west.

Other than during cyclones, March is not a windy month.

March is cyclone season in Mauritius. However, a direct hit from a cyclone is rare. If you’re visiting for a week or two, the chances of experiencing a cyclone are quite small.

While March is a wet month, abundant sunshine can still be expected, especially in the north and west. Typically, days start off sunny or partly cloudy with an increasing chance of rain as the afternoon progresses.